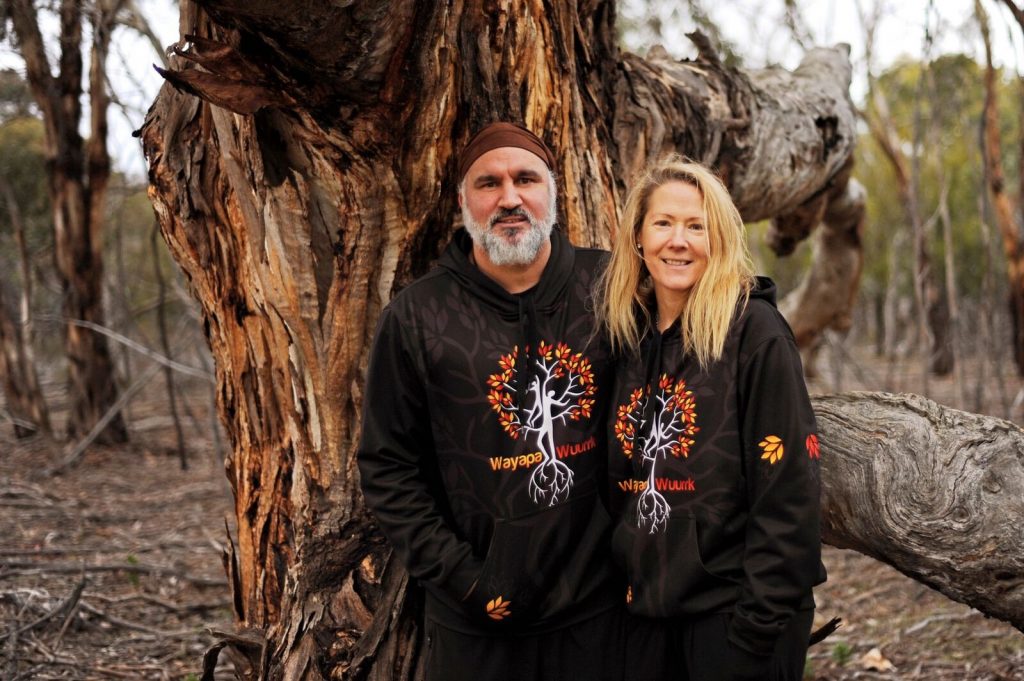 On a January evening at Melbourne’s Australia’s First Peoples in Education conference, Gunditjmara educator Jamie Marloo Thomas guides us though Wayapa Wuurrk, or “Connection with Country“. Grounded in “thousands of generations of First Nations knowledge”, the indigenous mindfulness practice is a combination of meditation and physical movement – likened to yoga but with the added dimension of connecting to the earth.

We remove our shoes and Thomas invites us to inhabit our bodies as conduits to the fourteen elements: the creator; the sun; the moon; the land; lightning; rain; wind; the tree; air animal; land animal; water animal; the hunter; the gatherer; the child. He developed the Wayapa method “as a way to teach my culture” after realising “the only time I felt whole – perfectly aligned and happy within – was while performing Ceremony on Country.”

Ceremony, he says, is “not about performance. Its true gift is wellness.”

The health benefits of practices that generate a sense of reciprocity between self and environment are well-documented. Many studies show the curative effects of mindful meditation, the links between environmental health and collective wellbeing and, more recently, between climate change and anxiety. “Your mind, your body, your spirit cannot be well if the earth isn’t,” says Thomas.

“Ceremony is not about performance. Its true gift is wellness.”

He first devised Wayapa as a youth worker for indigenous teenage boys, using it successfully “as a connection practice, tapping into ancient knowledge, for the modern world”. He and his partner Sara Jones soon recognised its potential to heal Country and people together, and to spread Indigenous knowledge more broadly to future generations. Teaching it to educators seemed an obvious route.

In the classroom, Wayapa has become a channel for resilience against modernity’s dysfunctions, says Gamilaroi educator Lee Couch, who teaches the practice at Thornbury Primary School. “Wayapa is about Knowledge and Aboriginal approaches to health and wellbeing.”

Learning about Aboriginal wellness is especially important given representations of Indigenous people often focus on trauma, Couch adds. “We all turn to something when we’re ill. Through Wayapa we can turn back to the land, because the earth is what holds and sustains us, and our presence is what we share.”

For Couch, Wayapa connects us with what’s real, and is “one hundred percent … about giving and receiving”

“It allows us to understand we’re not superior to the earth; that instead the earth teaches us. Even after all the bushfires, the earth is reincarnating itself – if we can’t see our own reflections in that then we’re not going to be able to receive Aboriginal wisdom,” she says.

Completing a diploma in the method has given Couch the authority to teach in a cultural manner. “It was a beautiful pathway to immerse in a more cultural experience. Wayapa gave me a way of connecting on a very different level. It actually gave me a way of teaching.”

For Thomas, the practice can be experienced as an intergenerational pathway: a way to connect with ancestors, descendants and the beings around us. “We all breathe the same air.”

Now recognised formally as an educational tool and therapeutic modality, Wayapa is accredited by the International Institute for Complementary Therapists (IICT) and introduced in a wide variety of settings – from prisons to kindergartens.

“You walk out and see the world differently and you wish other people had the same opportunity. Its effects are beyond wellbeing and reach into the land and beyond.”

Education consultant and behavioural analyst Michelle Walker, who spent many years directing the renowned Jindiworiback Childcare Centre at Victoria University in St Albans, says Wayapa works as a corrective to the estrangement from the land suffered by contemporary children. “What happens on the outside world impacts on a child’s inner world. So, a child’s environment can in turn impact a child’s inner ecology.”

For Walker, studying for a diploma in Wayapa was life-changing. “You walk out and see the world differently and you wish other people had the same opportunity. Its effects are beyond wellbeing and reach into the land and beyond.”

Aboriginal knowledge, she says, can be difficult to formalise and embed into structured learning programs. At Jindiworoback, she sent a staff member to do the Wayapa diploma, who then implemented it into her kindergarten program. Through the practice, she says, children started acknowledging and understanding why they are here – as caretakers of the land.

“At a particular time of day, the kinder children start to get tired. With Wayapa, the teacher embedded a practice where they could be quiet and wind down, using Wayapa elements to tell stories about keeping the land safe. It became second nature for them,” says Walker.

“It’s not tokenistic. When you walk into their room, it’s embedded in every aspect. It became part of who they are. And they became very good at telling stories through indigenous concepts.”

In her experience, children benefit from learning about taking responsibility for keeping the land healthy. “One child asked: ‘How do we look after the sky?’ Through Wayapa, we considered that question and determined that, ‘If we look after the land, this will take care of the sky’.”

Katrina Amon, Murri woman and Koorie Leader at Parkdale Secondary College, says Wayapa is now an integral part of events at the school. “Our Wayapa educator, Alana, has become part of the school community. She attends all our events and ceremonies.”

Katrina also runs the Kingston Koorie Mob, connecting Indigenous students from Parkdale SC and other local schools through activities that explore their cultural heritage. “The kids really enjoy Wayapa; they really relax,” she says. “But more importantly it’s about connecting to Country, the land and spirituality. It gives our Indigenous students the sense that their culture is recognised and appreciated.”

For Couch, Wayapa is compatible with Dadirri, an Aboriginal deep listening and still awareness practice in which she is also qualified. “One of the skills contemporary people haven’t developed is to be completely present through deep listening. Aboriginal knowledge is not about being right and correct. In my culture, it’s about listening and expressing. There’s no right and wrong about the messages you feel.”

She says Wayapa awakens students’ ability to attune their awareness to the land and realise their own transformative power. “Wayapa is amazing because it allows people to be present to the earth. It allows you to tune in and listen to the messages we receive from Country. Half of Country was on fire this year. There’s no better time to listen to Country than now.”

This article was originally shared on AEUNews.